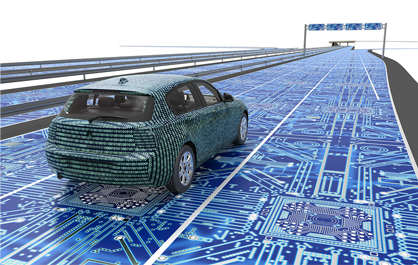 Few activities and operations are truly set it and forget it. Lights-out factories like the showcase installation run by technology company Siemens are proof of concept, but still the exception.

Business continuity in most cases requires periodic adjustment because environments and conditions are constantly changing.

However, here’s a thought that could change that.

The idea comes from the combination of the self-driving vehicle and decentralised financial transactions, plus the Uber (or Lyft or whoever) model of hire-to-drive services.

In theory, the artificial intelligence in the vehicle would allow it to interact with the Uber model to acquire customers, and use a technology like blockchain (decentralised transactions) to receive payment for services rendered and make payments on its lease back to its manufacturer.

Such a vehicle could run indefinitely, booking itself in for service, calling for roadside assistance in case or major problems, and sitting tight without earning, but without spending, while waiting for customers.

For the manufacturers or owners of such a mobile enterprise, however, the requirement for perfect or near perfect business continuity would be all the greater.

Not only would set-it-and-forget-it BC be an advantageous feature, but it could also become essential for many reasons, including safety and profitability.

That would mean designing in BC from the beginning, unless you wanted to employ an army of technicians to monitor such vehicles – which would defeat the goal of autonomy in the first place.

Of course, some sort of solution between the two might work. For example, the AI agent software piloting the car might check in at regular intervals with a central system to report on operational status and BC readiness.

Redundant and failsafe systems (self-healing reinflating tyres after puncture, individual electric motors powering each road wheel, and so on) would also lower the risk of operational interruption.

Then the only other question might be: is society ready for this kind of autonomous business continuity, anyway?

How’s Your User Experience for Your Disaster Recovery?
March 30, 2021

Why Stop at Just Disaster Recovery with Your DRP?
March 30, 2021

Decommissioning is Part of Disaster Recovery Planning
May 3, 2018

Why Stop at Just Disaster Recovery with Your DRP?
April 10, 2018

How’s Your User Experience for Your Disaster Recovery?
April 5, 2018
Go to Top